It was a mixed week for global equity markets last week.  In the UK, the FTSE 100 was down 0.6% as a combination of poor economic data and concerns of a longer-than-expected lockdown and harsher travel restrictions had an effect.  However, in the United States, the Dow Jones 30 registered its fifth positive week in six while the S&P 500 posted its third positive week in four. The Nasdaq advanced 4.2% last week for its best week since November and fifth positive week in six as shares of the “big tech” companies pushed the index to a new all-time high. 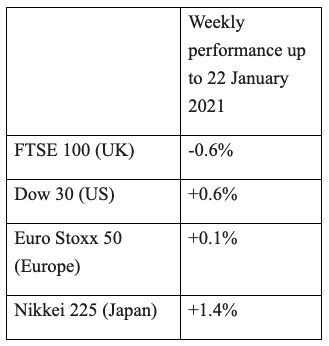 Against the Euro, £ Sterling closed on 22 January at 1.12 Euros, which was the same as the closing figure on 15 January.

Last week, we had updated inflation figures, as measured by the Consumer Prices Index including owner occupiers’ housing costs (CPIH).  It was 0.8% in December 2020 (this is December’s data which is reported in January).  This was up from 0.6% in the previous month, largely as a result of rising transport costs and increasing prices for clothing and recreation and culture.  The 12-month rate for the Consumer Prices Index (CPI) rate which excludes owner occupied housing costs and council tax was 0.6% in December, up from 0.3% in November.

There were no further changes to the Bank of England base rate last week following the two previous cuts in March.  The current rate remains at 0.1%.

The Omnis Managed funds, Openwork Graphene Model Portfolios and Omnis Managed Portfolio Service provide you with a diversified asset allocation in line with your Attitude to Risk, investing in Developed Market Equities, such as UK, US, Europe and Asia Pacific as well as Emerging Market equities.  Cautious and Balanced investors will also have significant holdings in UK and Global Bonds, as well as Alternative Strategies.