Last week, most global equity markets had a positive week despite it being like a a rollercoaster at times with often a positive day followed by a negative one.  This is because the week started strongly as results of a promising early trial for a vaccine against coronavirus boosted investors.  Whilst US biotechnology company, Moderna’s, success is still at an early stage, it raised the probability that the virus can be vaccinated against.

However, the on-going US-China tensions and mixed economic data continually tempered the enthusiasm. 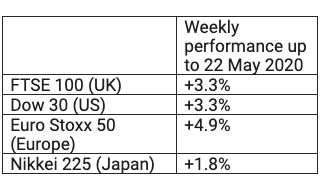 Last week, we had updated inflation figures, as measured by the Consumer Prices Index including owner occupiers’ housing costs (CPIH).  It was 0.9% in April 2020 (this is April’s data which is reported in May).  This was down from 1.5% in the previous month largely due to falling energy and fuel pump prices.  The 12-month rate for the Consumer Prices Index (CPI) rate which excludes owner occupied housing costs and council tax was 0.8% in April, also down from 1.5% in March.

There were no further changes to the Bank of England base rate last week following the two previous cuts in March.  The current rate remains at 0.1%.

The Omnis Managed funds, Openwork Graphene Model Portfolios and Omnis Managed Portfolio Service provide you with a diversified asset allocation in line with your Attitude to Risk, investing in Developed Market Equities, such as UK, US, Europe and Asia Pacific as well as Emerging Market equities.  Cautious and Balanced investors will also have significant holdings in UK and Global Bonds, as well as Alternative Strategies.